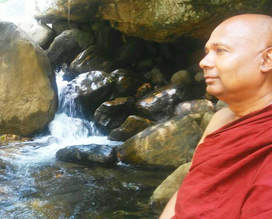 Born in 1958 in the hill country in Sri Lanka. Bhante Dhammawansha became a novice monk in 1976, receiving High Ordination in 1981. In the same year he entered the Buddhist University Sirivajiranana Dhammayatannya in Maharagama. Under the patronage of his Holiness Madihe Pananaseeha and his Holiness Ampitiye Rahula, Bhante received both his B.A. degree and his M,A. degree in Buddhism, History, Ethics and the languages of Sanskrit and Pali (the language of the Buddha)​

After doing missionary work in Scandinavia and Australia, Bhante traveled to the United States in 1996 for a personal retreat. He decided he would stay in the US and continue the teachings of Buddha. In 2001 he founded the Dhamma Wheel Meditation Society . The mission of DWMS is to make the 2600 year old teachings of Buddha and meditation practices available in the USA.

While his presence and teaching is requested in other states and countries, Bhante Dhammawansha is very active in the local community.  In addition to leading weekly scheduled meditations and Dhamma talks he also engages in social and interfaith work, gives talks to college and high school students, mental health professionals, law enforcement, drug/alcohol rehab centers, as well as to inmates within County Jail facilities. 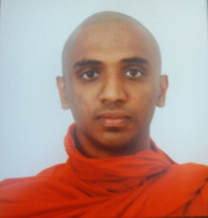 Born in Balangoda, Sri Lanka, Bhante Upasantha was ordained a novice monk in 2004 and received High Ordination in 2010 at Siri Vagiragnana Dharmayatha Bhikku under the patronage of Most Venerable Ampitiye Rahula and Most Venerable Valigamaganarathana.  He continued his higher education to receive his B.A. and M.A. degrees from the Buddhism University of Kalaniya, Sir Lanka.

His work of service includes several years of teaching at the Bhikku Training Center in Kandy and Lyceum International School in Nuwareliva.  He has also been active with SESCA and Pasawi France, an international foundation dedicated to helping the poor to receive better education and to elevate their standard of living.